Our lives are influenced by the places we live in. Major infrastructure projects, such as new roads, may bring new opportunities to local communities, but can also degrade the local environment and bring about undesirable impacts. So, how do new roads influence our behaviour, health and wellbeing?

Traffic and health in Glasgow – the M74 extension 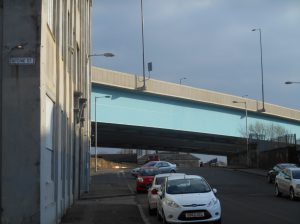 A five-mile section of the M74 motorway was opened in Glasgow, Scotland in 2011. This involved building a new six-lane section of motorway, together with junctions and slip roads, through a mainly residential area.

Researchers at CEDAR, and the Universities of Edinburgh and Glasgow, took the opportunity to find out more about potential effects on activity patterns, road traffic accidents and wellbeing in the local area. Supporters of the new motorway claimed that it would improve conditions for pedestrians and cyclists on local streets and help regenerate local communities. Others argued that it would encourage car use, degrade the local environment and deter local walking and cycling.

We compared the experience of residents who lived near the new motorway with those in two other similar areas of Glasgow, one with an existing motorway (the M8) and one with no motorway.

We conducted a postal survey in 2005, several years before road-building began, and a follow-up survey in 2013, approximately two years after the motorway opened. Over 1300 adults across the three study areas (M74, M8, no motorway) responded each time. In addition, nearly 200 survey participants agreed to wear
activity monitors for a week, enabling us to study their movement patterns.

We conducted detailed face-to-face interviews with 30 survey participants who lived within 400 metres of the new motorway, and spoke with a variety of community organisations and local people who had not taken part in the survey.