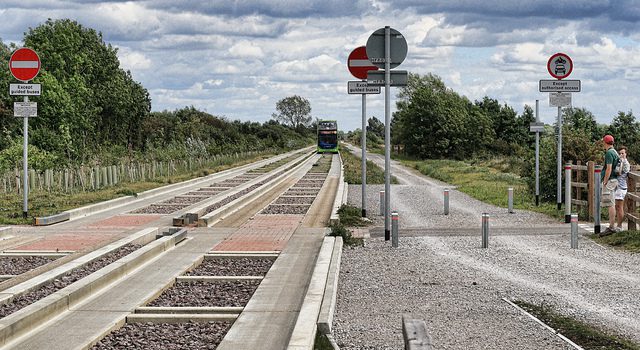 The bus might seem like a natural enemy of the vulnerable cyclist. But in Cambridgeshire, a ‘guided busway’ is in fact encouraging more cycling and helping commuters to become more active on their way to work. This is according to a new study from the University of Cambridge, funded by the National Institute for Health Research and published in the American Journal of Preventive Medicine.

The guided busway, commissioned by Cambridgeshire County Council and opened in 2011, provides a dedicated track that excludes other traffic, meaning that buses can keep to their schedules even during rush hours. It runs from St Ives into Cambridge and out to Trumpington via the Biomedical Campus. The project has provided a new bus network, two new park-and-ride sites at Longstanton and St Ives, and a traffic-free path for pedestrians and cyclists along the busway.

Supporting walking, cycling and public transport can help people to lead more active lives, reducing the risk of diabetes, heart disease and other health problems. Developments like the busway provide a ‘living laboratory’ where researchers can study the effects of changing the environment when randomised controlled trials are not possible.

This independent scientific study was led by the Medical Research Council (MRC) Epidemiology Unit at the University of Cambridge, in collaboration with University College London and the University of East Anglia. Researchers followed 469 commuters over time and assessed changes in their activity patterns before and after the opening of the busway. The latest results show that people living closer to the busway were more likely to increase the time they spent cycling on the commute than those living further away. These results follow others published earlier this year, in the International Journal of Behavioral Nutrition and Physical Activity, which showed a reduction in car use on the commute attributable to the busway. Interviews showed how commuters found the guided bus service convenient and accessible and appreciated the new traffic-free path. Others found the ticketing system confusing to begin with and disliked the lack of lighting along the path, but measures have been taken to address these issues.

The researchers also found that the largest effect on physical activity on the journey to work was seen in those commuters who were least active before the busway opened. This suggests that the busway could help shift activity patterns in the population at large, rather than just encouraging those who are already active to do a little more. Importantly, the study found no evidence that people taking up more active commuting compensated by reducing their leisure time physical activities.

Dr Jenna Panter, the lead researcher working on this study at the MRC Epidemiology Unit, said: “These findings provide new evidence to support changes to our transport systems as part of a public health strategy to support a more active way of life. People might naturally think of cycle lanes as part of these changes – but this research suggests that we need to look at the wider infrastructure as well.”

Dr David Ogilvie, the principal investigator who led the overall study, also at the MRC Epidemiology Unit added: “Although redesigning our towns and cities in this way may seem an obvious thing to do, the health benefits of doing this have rarely been tested in practice. Ours is one of the few studies to have done this, and it shows an effect of the busway even after taking account of a range of other factors that influence how people travel to work.”

Dr Liz Robin, Director of Public Health for Cambridgeshire, said: “This study reinforces the wider public health role of Councils, showing the real impact of transport planning on our residents’ day-to-day level of physical activity. Increased levels of routine physical activity will undoubtedly have a positive impact on health.”