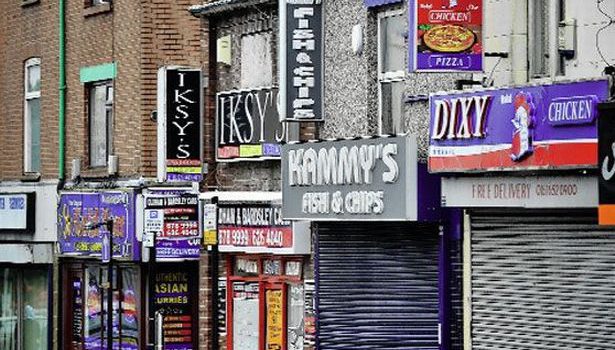 People who live and work near a high number of takeaway food outlets tend to eat more of these foods and are more likely to be obese than those less exposed, according to new research published in the British Medical Journal.

The first UK study to combine home, work and commuting environments of 5,442 adults (aged 29-62) found that those most exposed to takeaway outlets were almost twice as likely to be obese than those who encountered the fewest outlets.

Takeaway exposure was also strongly associated with a greater BMI and increased consumption of takeaway food. Those with the highest combined exposure to takeaway outlets consumed an extra 40g of calorific food a week (equivalent to half a small serving of French fries from a typical takeaway food outlet), and had a BMI on average 1.21kg/m2 greater than those least exposed. The association was most pronounced for exposure near people’s place of work.

Although this kind of population study cannot prove a causal link between environments and obesity, the researchers suggests that limiting the number of takeaway outlets people encounter on a daily basis might be successful in reducing consumption of unhealthy food and excess body weight.

Dr Thomas Burgoine, lead author of the study from the UKCRC Centre for Diet and Activity Research, which is based in the MRC Epidemiology Unit at the University of Cambridge, said:

“The foods we eat away from home tend to be less healthy than the meals we prepare ourselves, so it is important to consider how exposure to food outlets selling these high calorie foods in our day-to-day environments might be influencing consumption. Our study provides new evidence that there is some kind of relationship between the number of takeaway food outlets we encounter, our consumption of these foods, and how much we weigh.

“Of course this is likely to be just one of a number of factors that contribute to a person’s risk of developing obesity. However, our findings do suggest that taking steps to restrict takeaway outlets in our towns and cities, particularly around workplaces, may be one way of positively influencing our diet and health.”

“To date, studies examining the link between the neighbourhood food environment and diet and body weight have provided mixed results, which is why it’s important that we continue to study these relationships. In future this type of research will provide the robust evidence needed to develop effective strategies to tackle obesity and promote a healthier lifestyle.”

Over the past decade, consumption of food outside the home has increased by almost a third, while at the same time, takeaway food outlets have proliferated in cities and neighbourhoods. Scientists believe this changing UK ‘foodscape’ may be contributing to rising levels of obesity.

Some local authorities have begun to place restrictions on takeaway outlets, such as exclusion zones around schools and limits on how many hot food takeaways can operate along a high street, in a bid to curb obesity levels. The results of this study suggest that such policies might be effective.

Previous research into the link between the number of takeaway food outlets, consumption and body weight have mostly focussed on the residential neighbourhood environment and the results have been inconsistent. This study of 5,442 individuals in Cambridgeshire was the first to look at access to takeaway foods at home, work and journeys in between.

The study found that participants were exposed to an average of 32 takeaway outlets – nine each in their local neighbourhood and on their commute, and 14 within a mile of work. This is likely to explain the stronger link between workplace exposure, food consumption and BMI.

The study accounted for differences between the participants, for example in age, sex, household income, smoking and levels of physical activity. However, it only looked at a subset of the UK population (in Cambridgeshire), so the results may not necessarily be applicable to the rest of the country.

The research was funded by the MRC and the UK Clinical Research Collaboration.